Sri Lanka promoted at the Feast Day of the National Shrine of St. Jude Thaddeus in Manila - Ceylon Tea 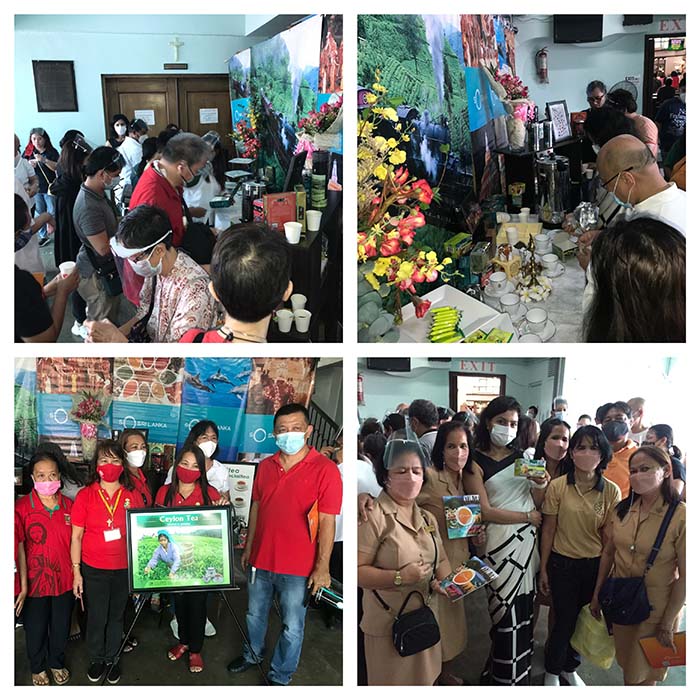 Fostering friendship and people-to-people ties through religious diplomacy: Sri Lanka promoted at the Feast Day of the National Shrine of St. Jude Thaddeus in Manila

At the invitation of Rev. Fr. Lino Nicasio SVD, Parish Priest and the Rector of the National Shrine of St. Jude Thaddeus, the Embassy of Sri Lanka in Manila participated with a country promotion at the celebration of the feast day of the shrine’s patron saint on 28 October 2021.

With the goal of promoting Sri Lanka to the devotees and religious community of the parish, a tourism and tea promotion booth was organized by the Embassy to showcase the country’s tourism attractions including the religious tourism sector as well as its most prominent export product – Ceylon tea. The booth was formally launched with the lightning of the oil lamp by H.E. Jose F. Cardinal Advincula, the Archbishop of Manila, Ambassador Shobini Gunasekera, and shrine officials.

In the holy mass officiated by the Archbishop of Manila, the Embassy’s officials and staff performed a soulful rendition of “Namo Mariyani” a hymn of devotion to the Virgin Mary in Sinhala.

In her remarks, Ambassador Gunasekera highlighted the shared faith of Christianity as a notable platform to further enhance and consolidate the longstanding cordial relations between Sri Lanka and the Philippines particularly in the economic, political, social, and cultural spheres. She also invited the parishioners to enjoy Sri Lanka’s beauty and unique features by visiting the country as their pandemic-stress buster destination.

Meanwhile, Rev. Fr. Nicasio expressed his appreciation to the Embassy for its valuable participation and commended its worthwhile initiatives to develop cultural and people-to-people ties with the Philippines.

After the mass, Ceylon tea was served to the guests and devotees while tourism promotional materials and tea samples were distributed. The festivities were attended by hundreds of devotees from all-over the country and was broadcasted live in social media with approximately 100,000 virtual attendees.

The Philippines is a predominantly Catholic nation ranking third with the largest Catholic population after Brazil and Mexico globally. Notably, the country is home to a Sri Lankan religious community of the Catholic faith composed of priests, nuns, and missionaries, most of whom are engaged in various pastoral activities and higher education pursuits.