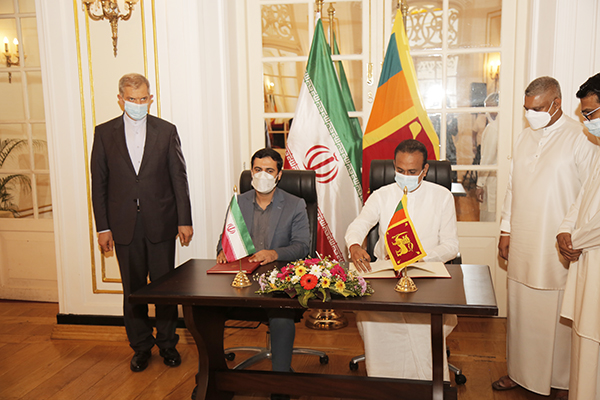 The Ministry of Plantation of the Democratic Socialist Republic of Sri Lanka and the Ministry of Industries, Mines and Trade of the Islamic Republic of Iran desires to formulate a scheme for the settlement of a sum of US$ 250,925,169 outstanding from Ceylon Petroleum Corporation to National Iranian Oil Company by means of utilizing the said sum to facilitate the export of Ceylon Tea to Iran by signing a memorandum of understanding (MoU). The MoU signing took place on Tuesday the 21st December 2021 at 12.00 noon at the Foreign Ministry.

This MoU was signed by Hon. Dr. Ramesh Pathirana, Minister Plantation of Sri Lanka and Hon. Alireza Paymanpak, Deputy Minister of Industry, Mine and Trade of Islamic Republic of Iran. The MoU is a form of mutual commitment in complimenting each other`s duties and function in the Formulation of a Scheme for the Settlement of Sri Lanka’s Oil Outstanding to the Islamic Republic of Iran through the Exportation of Ceylon Tea.

Iran is among the top 10 importing countries of Ceylon Tea for the past several decades. Ceylon Tea which had a market share of around 47% in 2016 dropped to around 25% in 2020 due to the economic sanctions resulting in banking restrictions, payment problems and depreciation of Iranian Riyal. From a peak of 38.42Mn Kgs in 2013, tea exports from Sri Lanka to Iran dropped to 14.73Mn Kgs in 2020.

Due to US sanctions imposed on Iran in November 2012 and with the absence of an accepted payment mechanism through the banking system, Sri Lanka tea exporters found it difficult to receive the export proceeds from Iranian buyers. As at present the payments are usually channeled through intermediary countries and on many occasions export proceeds are received in installments incurring inordinate delays. The additional US sanctions on Iran is creating further impediments for Sri Lanka to export tea to that destination.

The proposed scheme is to seek the possibilities of operationalizing a mechanism to settle the long outstanding debt of USD 250,925,169/= to the National Iranian Oil Company (NIOC) by Ceylon Petroleum Corporation (CPC) through increasing the export of Ceylon Tea. Since the Iranian authorities have been repeatedly highlighting the importance of the early settlement of the debt, this scheme will enable the Ministry of Finance to make the settlement in local currency through trenches of USD 5 million equivalents.

Under this scheme, Ministry of Finance is expected to release Sri Lanka Rupees of an equivalent amount of USD 5 Million per month (at the exchange rate declared by the Central Bank of Sri Lanka) on the first Monday of each month to Sri Lanka Tea Board (SLTB) in settlement of the outstanding debt arising from oil purchases by CPC until the entire USD 250,925,169.00 is settled. Consequently, SLTB will be settling payments to Sri Lanka tea exporters upon confirmation of tea consignments are shipped to Iran by the tea exporters.  The Sri Lanka Tea Board will establish a dedicated account to receive funds from the Ministry of Finance and disburse same to tea exporters.

The mechanism will be scrutinized through a recognized Audit Firm and the Sri Lanka Tea Board (SLTB) will settle the payments to tea exporters from the funds released and deposited by the Ministry of Finance based on the recommendations of the selected Audit firm. The proposed arrangement is envisaged to provide the equivalent of USD 5 Million per month to supply Ceylon Tea to Iran without any international money transactions as overseas remittances will not be involved under this scheme.

Sri Lanka will be in a comfortable position to serve Iranian tea market until the entire USD 250,925,169.00 is utilized and the debt payment to Iran is settled while reimbursing the Sri Lanka tea exporters in SL Rupees.  This scheme will not violate any UN or US sanctions since tea has been categorized as a food item under humanitarian grounds while none of the black listed Iranian Banks will be involved in the equation. Further, the recommended scheme will save Sri Lanka much needed foreign currency since the settlement to Iran would be made in Sri Lankan rupees through the sale of Ceylon Tea. Similarly, proposed sale of tea will not generate foreign currency as the tea exporters in Sri Lanka will be paid in local currency.